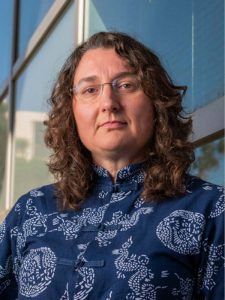 Prof. Scott received her Ph.D. in Inorganic Chemistry from Iowa State University, under the direction of Jim Espenson and Andreja Bakac, for her work on the activation of O2 and transition metal-catalyzed oxidation mechanisms. She was a NATO Postdoctoral Fellow with Jean-Marie Basset at the Institut de recherches sur la catalyse (CNRS) in Lyon, France, before joining the faculty of the University of Ottawa (Canada) where she was named a Canada Research Chair. In 2003, she moved to the University of California, Santa Barbara, where she currently holds the Duncan and Suzanne Mellichamp Chair in Sustainable Catalysis. She holds joint faculty appointments as a Distinguished Professor in both Chemical Engineering and in Chemistry & Biochemistry, and serves as Executive Editor for ACS Catalysis and a member of the Board of Reviewing Editors for Science. Her research interests include the design of heterogeneous catalysts with well-defined active sites for the efficient conversion of conventional and new feedstocks, as well as environmental catalysts to promote air and water quality. She develops new kinetic and spectroscopic methods to probe reaction mechanisms. In 2014, she founded the Mellichamp Academic Initiative in Sustainable Manufacturing and Product Design at UC Santa Barbara, where she now leads an interdisciplinary program in research and education involving about 30 faculty from chemistry, chemical engineering, materials, environmental science, industrial ecology, technology management, political science, economics, and science communication. She has been named a Miller Research Professor at UC Berkeley (2001), a Visiting Professor of the Chinese Academy of Scientists (2012), the Steffenson Lecturer at Iowa State University (2013), a Visiting International Professor of the University of Lille (2016), the Ipatieff Lecturer at Northwestern University (2017), the Grace Hopper Distinguished Lecturer at the University of Pennsylvania (2017), a ChangJiang International Scholar of Dalian University of Technology (2018), the Kurt Wohl Lecturer at the University of Delaware (2019), the Boulder Scientific Lecturer at Colorado State University (2019), and the Eastman Lecturer at UC Berkeley (2019). In 2020, she was the elected Chair of the Catalysis Gordon Conference.