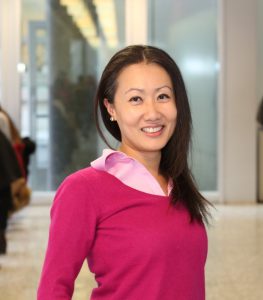 Department of Chemical Engineering and Applied Chemistry, University of Toronto

Ya-Huei (Cathy) Chin is Associate Professor and Canada Research Chair (Tier II) in Advanced Catalysis for Sustainable Chemistry at the University of Toronto. She joined the University in 2011, after receiving her Doctor of Philosophy (Ph.D.) degree in Chemical Engineering from the University of California, Berkeley. Before then, she was a research engineer (2000-2002) and then senior research scientist (2002-2005) at Pacific Northwest National Laboratory (PNNL), one of the ten National Research Laboratories for the U.S. Department of Energy.

Her recent work focuses on drawing mechanistic linkages for catalytic events during alkane oxidation on Group VIII metal clusters and conversion of oxygenates to value-added chemicals and liquid fuels. Specifically, she applies isotopic, kinetic, and density functional theory methods to study the dynamics of catalyst surfaces and catalytic pathways for reactions at the vapor-solid and liquid-solid interfaces.

She serves as an associate editor for the Journal of Catalysis and as an advisory board member for several premier journals of the field, including Applied Catalysis B: Environmental, Reaction Chemistry and Engineering, Chem Catalysis, and Canadian Journal of Chemical Engineering.